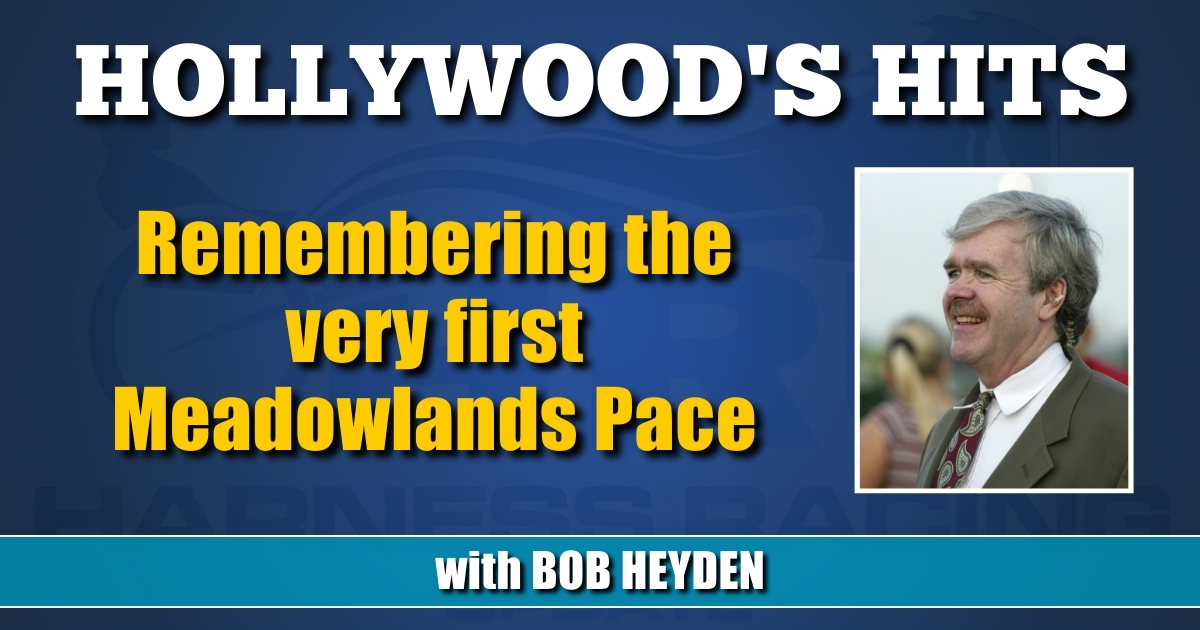 Let’s take a look back at the very first Meadowlands Pace in 1977 with a dozen notes of interest:

3. It was a 10-race card with an 8 p.m. post, seven of 10 winners paid between 4-1 and 5-1, 11 drivers in the two elims went on to the Hall Of Fame. The two longest-priced horses were Keystone Banshee with Peter Haughton at 77-1 (eighth) and Stan Banks drove Thorpe Messenger to a fifth and qualifying spot at 87-1 and then was sixth in the final at 81-1 — both times the longest price.

5. Bill Drummond found that fancy credentials only went so far in the very first edition. His 18-for-21 overall best record going in didn’t amount to a lot when he finished seventh and didn’t advance to the $425,000 final.

6. The name John Campbell appeared in the program in 1977 — even though it was five months prior to his arrival to the Big M. He had driven a colt named River Captain at Detroit Race Course who did not qualify to the 12-horse Pace final among the 24 that tried. He paced in 1:56.4 for Lester Pullen. Campbell had driven that colt to victory for a $48,000 purse just 31 days or three starts prior. He raced for Frank Nakagawa of London, ON.

7. The two Pace favorites BOTH came from the Kopas barn and both started from the second tier — Nat Lobell-4th at 2.50-1 and Jade Prince second at 3.60-1.

8. Big Towner was able to make the final but brought up the rear. He was the most successful commercial sire at well over $100 million later. Governor Skipper won the division title that year for 3yocp, but was next to last in his elimination.

11. Six of the nine drivers in the final (B Gs Bunny scratched and never raced again) never competed in another Meadowlands Pace final.

Next Saturday, July 17 marks the 40th anniversary of John Campbell’s first million-dollar drive. In 1981, he was fourth with Slapstick in the Meadowlands Pace won by Conquered. Campbell was sent off at 5-1 driving for Lee Broglio.

It would be three years to his record-breaking earnings season of 1982 when he banked over $550,000 and was clearly the top older pacer in the sport.

Women have won the last two editions of the Meadowlands Pace — Nancy Takter with Tall Dark Stranger and Linda Toscano with Best In Show. But it was Andrea Chadwick in 1992 who got the ball rolling in the Meadowlands Pace with Lord Willing. Though the chestnut finished eighth, it was the very first time a female trainer tried it versus the boys. The son of Energy Burner was 3rd in his elimination at 72-1, then was sent off 22-1 in the $1 million final. Allen Cullen drove. (Carlsbad Cam won that year).