Remembering the 200th Anniversary of the 1821 Greek Revolution: Ibrahim Pasha and Mystra 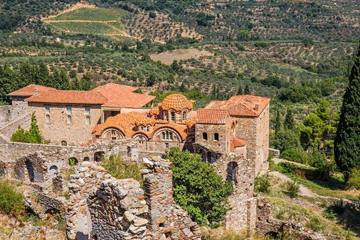 Greek songs remember Ibrahim Pasha in a negative way. I did not realize who he was and what he almost accomplished. The online encyclopedia Britannica describes him as brilliant. None of his atrocities of the civilian population at Missolonghi or Morea (Peloponnese) are mentioned. In the Britannica article the Greek Revolution is stated in two sentence: Ibrahim landed in Greece in 1825, subdued Morea, but a combined British, French and Russian Squadron eventually compelled the Egyptian force to withdraw.”1 The Editors of Encyclopedia Britannica and the most recently revised and updated article by Adam Zeidan, Assistant Editor, ignore the European and American primary sources accounts that portray a different viewpoint of Ibrahim Pasha. 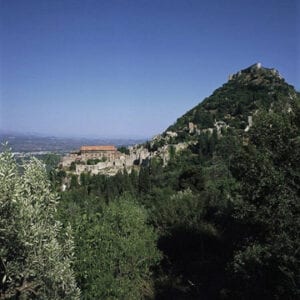 As George Santayana said,  “History is always written wrong, and so always needs to be rewritten.”2 It is estimated that 3,000 Greek men were killed during the Exodus of Missolonghi by Ibrahim Pasha’s forces. The 6,000 women and children of the city were taken as slaves, sold to the slave markets of Constantinople and Alexandria. The Ottoman-Egyptian casualties amounted to 5,000 men.3 Ibrahim’s killing of civilians was the deciding factor that changed public opinion towards the Ottoman power: a government that won battles through ethnic cleansing of Eastern Orthodox Christians. The European public applied pressure on their governments to free Greece.

Mr. Kalimniou reveals a fact: Few of them are told that Ibrahim Pasha was Greek and a particular of the Macedonian variety born in Drama to a repudiated Greek woman who found herself in the harem of Mehmet Ali, the first Khedive of Egypt. Indeed, Greek historiography tends to gloss over the doings of those of its sons that embraced the lifestyle of their oppressors… “Yet the history of the Ottoman Empire and indeed the key to its longevity and success lay in its ability to harness the expertise and talents of people of diverse ethnic backgrounds in governance, diplomacy, economics and the military.”5 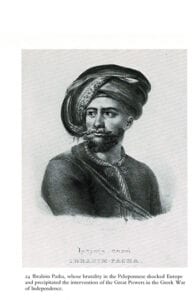 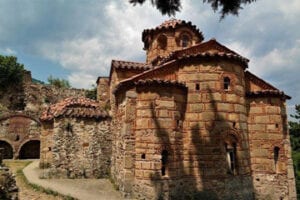 Encyclopedia Britannica  states that he was a son or adopted son of Muhammed Ali of Egypt. http://greekhistoryandprehistory.blogspot.com/ states  Ibrahim was born in the town of Drama, in the Ottoman province of Rumelia currently located in Greek Macedonia to a Greek Christian woman and a man named Tourmatzis.6 Ibrahim Pasha of Egypt was Greek, that is ignored totally in Britannica. After his success in Missolonghi, Ibrahim Pasha continued the devastation of Peloponnese. He ignored the outcries of Western powers. Ibrahim Pasha had three battles in Mani. He was repulsed by everyone, man, woman, and child. This is why people of Mani say with pride today that  “No Turk ever set foot in their land.”

Sir Steven Runciman, a leading Byzantine historian describes the final destruction of the Byzantine capital of Mystra. The population was forbidden to bear arms. Ibrahim’s well-trained army by Frenchmen arched through the Peloponnese. “Everywhere along his path, towns and villages were systematically burnt and fields destroyed. The population was slaughtered, except for those who could escape into the mountains and a few who were considered valuable prisoners.”7 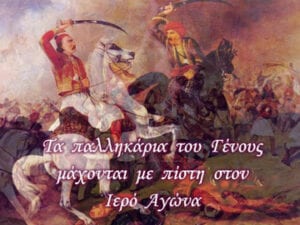 Runciman points out “Ibrahim’s atrocities aroused horror in Europe and were to result in the end the Great Powers coming together to take joint action to save the Greeks. Ibrahim Pasha destroyed Mystra on September 14, 1824. Everything burnt. The British government sent Captain Hamilton “to intercept the Pasha and arrange a peaceable exchange of prisoners. When they found Ibrahim Pasha the next day (9/15/1824), he received them graciously, ‘but told them that though he regretted the necessity, he intended to burn and destroy the whole Morea. I will not cease,’ he repeated ‘till the Morea be a ruin.’” As Captain Hamilton passed through Mystra 3 days later 9/17/1824, the city was smoldering with fire and desolate. The end of the Byzantine capital of the Peloponnese.

In 1825, Ibrahim’s forces marched through the Peloponnese to complete its devastation. In 1827, Britain, France and Russia saved Greece for Greeks in the October 20th naval battle of Navarino. Ibrahim Pasha left the Peloponnese 10 months later in August 1828.8 The Greek guerrilla bands harassed his army, and in revenge he desolated the country and sent thousands of the inhabitants into slavery in Egypt.9

The Kingdom of Greece was established in 1832. King Otho, Prince of Bavaria, landed in Nafplio to take over the kingdom in January 1833. Otho and advisers were Germans deeply interested in the classical past. They had no interest for the Middle Ages. After the destruction of Mystra, a new administrative center in Laconia, was set up in Sparta, instead of Mystra. The new city of Sparta was inaugurated in 1834. No one returned to Mystra. A furthermost suburb survived to become the town of Mystra.10 Mystra today is an abandoned city visited by tourists. 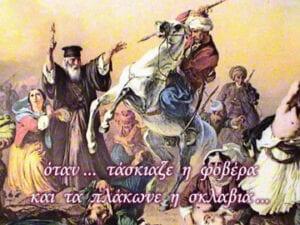 An islamicized Greek, Ibrahim Pasha destroyed the Peloponnese. Britannica mentions nothing about his genocidal brutality, only his brilliance. One must question any internet accounts of Greek extermination of Muslims. The original Western sources show the opposite, emphasizing the slavery of Greek civilian population in Egypt. Ibrahim Pasha’s destruction and enslavement of Greeks led the West to say ENOUGH. The Peloponnese must be saved for Greeks and not be repopulated with immigrants from Ibrahim Pasha’s homeland.