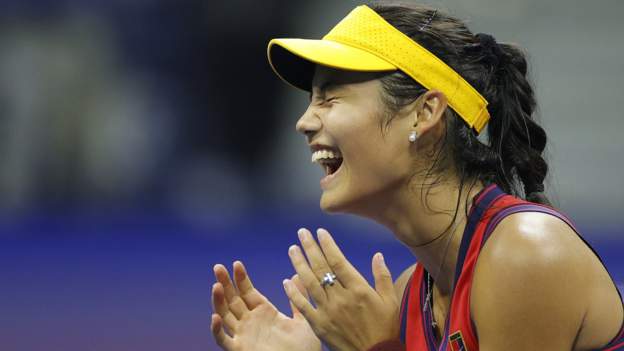 Raducanu, 18, extended her dream run with a 6-1 6-4 victory in which her dominance again almost defied belief.

She is the first qualifier to reach a Grand Slam final and will play another teenager Leylah Fernandez on Saturday.

Raducanu is the first British woman in a major singles final in 44 years.

Watched on by Virginia Wade – the last woman to achieve that feat at Wimbledon in 1977 – Raducanu produced another fearless and ruthless victory that stunned those watching on Arthur Ashe Stadium.

After confidently swatting away a volley on her first match point, Raducanu immediately dropped her racquet on the court and covered her mouth with both hands.

Quickly she broke out into a beaming smile before lapping up the acclaim of a rapturous crowd on the world’s biggest tennis court.

“The time in New York has gone so quickly, I’ve been taking care of each day and three weeks later I’m in the final. I actually can’t believe it,” Raducanu said.

After coming through three qualifying matches to reach the main draw, she has not dropped a set in any of her nine matches at Flushing Meadows.

It is only Raducanu’s second Grand Slam tournament and the fourth tour-level event of her career.

Before her run to the Wimbledon last 16 earlier this summer, Raducanu was ranked 336th in the world.

This win puts her on the verge of the top 30 after already being assured of becoming the British women’s number one by reaching the last four at Flushing Meadows.

Most pertinently, it gives the London teenager – who also passed her A Levels this summer – the opportunity to win one of tennis’ most prestigious titles when she faces Canadian 19-year-old world number 73 Fernandez at 21:00 BST on Saturday.

Given the one-sided nature of the victory against Sakkari – and those before it – Raducanu will not be fazed by the occasion.

Reaching the last 16 at Wimbledon on her Grand Slam debut catapulted Raducanu into stardom, yet somehow she has managed to surpass what she achieved there with the extraordinary exploits in New York.

Yet again she dismantled a much more experienced opponent with such ease that it breathtakingly belied her age and experience.

Former British number one Greg Rusedski said her performance against Sakkari was “worthy of a world number one”.

French Open semi-finalist Sakkari, like those opponents before her, was left befuddled by Raducanu’s poise and execution. The Greek, who was also aiming to reach her maiden Grand Slam final, was unable to cope with Raducanu’s intensity and could not find a solution to negate it.

Raducanu faced seven break points in her opening two service games, seeing them all off to hold both and move into a 3-0 lead with a break sandwiched in-between.

Sakkari became frustrated with her inability to take her opportunities, chuntering at her box and complaining to the umpire before running off to swap her skirt at the first changeover.

In contrast to Sakkari’s anxious demeanour, Raducanu seemed completely unflustered by the occasion.

That continued as the Briton, backed by a few fans dressed in Union Jack colours and waving flags, won all the decisive points on the way to clinching the opening set in 36 minutes.

Being the frontrunner is a position Raducanu has become accustomed to at Flushing Meadows and once she broke for a 2-1 lead in the second set, there looked to be little way back for Sakkari.

Pressure continued to be applied in each of the Greek’s next two service games – but she managed to hold and maintain hope by remaining a single break down.

With the Greek player’s family looking increasingly tense as they watched on, Sakkari saved five break points in a momentous hold lasting almost 10 minutes for 4-3.

After exchanging holds, Raducanu then had the opportunity to serve for the match.

A wayward forehand put Sakkari 15-0 ahead, before Raducanu found a first serve that could not be returned and led to a loud roar of ‘Come on!’, which signalled the Briton’s relief.

A nerveless forehand down the line was timed to perfection for 30-15 and another penetrating baseline return set up a match point.

With a place in the US Open final beckoning, there were no signs of nerves as she sealed victory with a forehand volley.

Afterwards Raducanu said she had looked to former British number one Tim Henman, standing at the side of the court in his role as a television analyst, for reassuring support before serving on match point.

“Tim is honestly such a big inspiration, he was telling me to treat it one point at a time,” she said.

“In moments like this you definitely can’t get ahead of yourself and you need stay present.

“I’m grateful to Tim for everything he has done for British tennis and for me.”

New York’s teenage kicks signals a changing of the guard

Raducanu’s victory then set up the eighth Grand Slam final in the Open Era between teenagers.

It is the first since the 1999 US Open when American hope Serena Williams beat Switzerland’s Martina Hingis.

The success of Raducanu and Fernandez caps a tournament where a host of young stars have filled the void of several big names – in particular Williams, Roger Federer and Rafael Nadal – with superb performances.

Martina Navratilova, the 18-time Grand Slam singles champion, said Raducanu and Fernandez’s success was a “changing of the guard” moment.

What Raducanu has achieved ‘does not seem real’ – reaction

Naomi Broady, British player on BBC Radio 5 Live: “I am just speechless, I am so so happy for her. It wasn’t Maria Sakkari’s night but it was the sheer pressure put on her by Emma Raducanu right from the start.

“She had those seven break points, Maria Sakkari, and she couldn’t take one. From that moment Raducanu ran away with the match.

“How exciting is this? We’re allowed to be excited about this, we’re not being British and ahead of ourselves – this is amazing!”

“You think about the players who since Virginia Wade in 1977 have been trying to reach a Grand Slam final for Britain in the women’s game – Johanna Konta came very close at the French Open in 2019 and Jo Durie too, a semi-finalist at the US Open among other appearances at that stage of a Grand Slam.

“Yet Emma Raducanu has done it at the second attempt at her Grand Slam and has taken all of our breath away with the way she has played throughout this summer. It doesn’t seem real.”